The Wisdom of Faith with Huston Smith & Bill Moyers 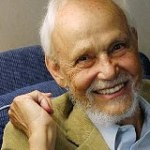 This video series provides a rich resource for instructors interested including curriculum modules on understanding the culture of Asia.

The Wisdom of Faith with Huston Smith and Bill Moyers:

All religions, at their core, are the same: this remarkable claim is made by Huston Smith, bestselling author and professor of comparative religion at Syracuse University, M.I.T., and the University of California, Berkeley.  Smith learned about Chinese language, culture, and religion while growing up near Shanghai, and from his life long study, he explains how the intertwining of opposites is key to understanding the great religions of China: Confucianism, Daoism, and Buddhism. Smith shows that Eastern religions provide an emphasis on direct experience and a method for attaining that.

His book The World’s Religions has sold more than 2 ½ million copies worldwide since 1959, and is considered one of the defining treatises on the subject. In this series of conversations with renowned journalist Bill Moyers, Smith provides thoughtful insights into the world’s largest religions with these compelling episodes: Hinduism and Buddhism, Confucianism, Christianity, Judaism, Islam, and A Personal Philosophy.  Taken at their best, they provide universal truths that unite and define the human spirit.